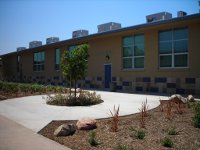 Photo Caption: The courtyard of a new building at El Cajon Valley High School that has been modernized to house art classrooms, a photography lab and TV studio.

The additions are part of the $12.68 million creation of Building 200 at the school, which began in March 2011 and is one of many projects under way in the Grossmont Union High School District. Construction is wrapping up on the project, which replaced a 50-year-old facility with what the district said will be additional, more cost-effective and usable teaching space.

Two-stories high and about 50,000 square feet in size, Building 200 will also include 21 new classrooms designed for a variety of studies, including nursing science, and ceramics and culinary arts.

Matt Gates, senior construction manager for Erickson-Hall, said the building was about 95 percent complete as of early August, and is poised to become the focal point of the Granite Hills campus.

Designed by architectural firm Ruhnau Ruhnau Clarke, the project was funded by Proposition U — a $417 million general obligation bond program that dates back to 2008 — and aimed to modernize all of the high school district’s schools and build up its Career Technical Education facilities. Together with 2004’s Proposition H, a $274 million bond program meant to fund repairs of the district’s aging schools, a lot of work has continued through the years and is still planned in the district.

When combined with state funding eligibility, grants and developer fees, the program has the potential for $928 million to be invested in school improvements in the district.

The two sources of money, Gates said, are working hand-in-hand to transform the district. Erickson-Hall is also currently working on projects funded through the programs at El Cajon Valley and El Capitan high schools.

Building 200 at Granite Hills was on pace to be turned over to the school by mid-August. A structural steel building with a mainly stucco shell, it will feature lots of glass and won’t be hard to look at, Gates said.

“It’s a beautiful building,” he said. “It fits in well in the new phase.”

The front end of the campus is mainly single-story, 14-foot stucco buildings with low-sloping roofs, but two years ago, Erickson-Hall built the school’s new science building on the back end of the campus. Building 200 will basically be an annex to that work, Gates said.

It incorporates a new courtyard on campus as well, with shade structures Gates described as creating the feel of an umbrella.

The building’s culinary arts department has been outfitted with high-end stainless steel equipment, including the cooler systems, cooking ranges and air ventilation hoods in the kitchen areas. The TV studio includes a green screen and sound rooms for recording and performance control, while the photography lab provides a new dark room and ample room for equipment storage.

Careful attention was paid when designing the building’s first-floor nursing science classrooms, which have been built with all acid-resistant epoxy countertops.

The building itself is an example of how the Proposition U and Proposition H bond programs are feeding off each other.

As part of the Proposition H scope of work, Erickson-Hall took down the 14 re-locatable classrooms that made room for Building 200. Some of the re-locatable were at least 40 years old, Gates estimated.

“These things were rotted, and falling apart,” he said.

Where Prop. H started off mostly as modernizations of existing buildings and funded repairs work, Prop. U is bringing significantly more new construction, which is where the erection of Building 200 came in.

A lot of the recent focus of the bond programs has been placed on career technology education projects, like what was seen in Building 200. Many of the projects have gone to better various schools’ career-oriented facilities, such as art and welding facilities.

Erickson-Hall is also performing bond-funded work at El Cajon Valley High School, where its crews are halfway through the three-building modernization of the 700 North, 700 South and 400 buildings.

A $7.5 million project, the 700 North and South buildings have been modernized to create new art classrooms, a photography lab and a TV studio there, as well. The modernization of Building 400 there — which was designed to host culinary arts classes — began earlier this summer, and will be complete around mid-November.

At El Capitan High School, Erickson-Hall is completing the agricultural complex on the front end of campus, following the construction firm’s 2011 greenhouse build, and replacement and modernization of two barns, a storage facility and a new show ring for animals retained for the school’s program. In this $7 million phase, the new three-classroom building is going up for the agricultural studies program, and will include new walk-in coolers and a computer lab.

A variety of other projects around the district’s 11 campuses will be rolling out or be under way through the end of 2012, including the building of a new quad area at Santana High School and a library reconfiguration at Monte Vista High School. El Capitan High School is scheduled to get new boys and girls physical education facilities, and Grossmont High School will be getting a new arts building.

Helix Charter High School is due to receive a new gymnasium foyer and a modernization of both its cafeteria and physical education facilities, while three buildings there will be demolished to make way for a new quad area.

In addition to the three-building modernization Erickson-Hall is completing at El Cajon Valley High School, the school is set to have its boys and girls physical education facilities modernized, including the weight room and dance facilities.

Among other plans cited when both bond measures were passed was the addition of a 12th high school in the district, one that would keep high school students living in the Alpine area from having to make such a long trip west to go to school.

Gates said Erickson-Hall has already been selected to do the new school build, but that orders for construction have yet to move forward as the district works its way through getting permits in order.

Other than the delay on that long-awaited new school, Gates said the bond programs have accomplished a feat that can be seen district-wide.

“These campuses haven’t been modernized in a long, long time,” Gates said. “It’s really impressive to see the features and the aspects of each campus change as the construction is moving forward.”