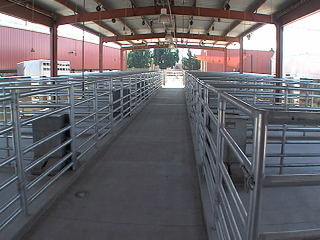 The six-building complex can hold up to 60 sheep and goats, 120 pigs, 200 chickens and up to eight steers.

The facility sits on two acres and also includes a high-tech greenhouse, two arenas, wash areas and a birthing house.

All are features that many would associate with farming or ranching. However, the students and teachers said there is something they need to make clear.

“You think agriculture and you think somebody raising a pig somewhere and it’s just so much more than that,” said Principal Laura Whitaker.

California is the nation’s top agricultural state, generating nearly $32 billion dollars a year. That makes it the number one industry in the state.

With two new classrooms and a computer lab, the agriculture department has already grown from 350 to 500 students with the capacity to handle 100 more.

“There are so many more scientific ways to do things now and the kids didn’t have that opportunity before,” said Whitaker, who was referring to what the new complex provides.

From our food to renewable energy and even our clothes, agriculture has a wide reach and the students understand its importance. They are hoping more kids will catch on.

“It is really shocking that it’s not as talked about as other fields,” said Maupin. “Especially with the new ag department, we can get more kids interested.”

The agriculture program is the only one in the Grossmont Union High School District. The upgrades were passed by voters as Proposition U and are part of the district’s career technical education plan.