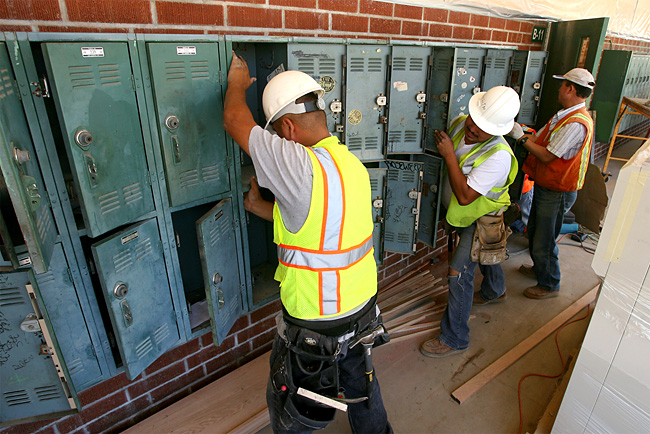 LA PUENTE – Students at Nogales High School found some big changes when they returned to school last week. Rowland Unified has begun a nearly $8 million renovation project that will transform the high school.

“It’s our 50th anniversary and I like to say we’re giving the school a face-lift,” said Principal Nancy Padilla. “The students and staff are really excited about all the construction work.”

Contractors began tearing up the school this summer. Nogales’ library has been gutted. And the science wing is facing a similar fate as work crews remodel the labs and classrooms.

“The library has been ripped down to its shell. The only thing left are the bricks,” said Khary Knowles, senior project manager for Erickson-Hall Construction. “We’re rebuilding the entire library.”

Assistant Superintendent Ruben Frutos said the district is spending more than $1,845,000 on the new library.

“We’ll have a state of the art library when we’re done,” Frutos said.

A new digital network is being installed, and reinforced floors were built to handle large rolling shelves that will store the high school’s textbooks during summer recess.

“The new library will continue to serve the community. We plan to open it after school and Saturdays so families can use it,” Padilla said.

The Nogales principal said the books have been moved to the Manor, which will serve as a temporary library.

At the back of the sprawling campus, crews had also cordoned off two classroom wings. One was being gutted, while crews finished new science labs in the other.

Padilla said six laboratories were ready for use. Another six will be finished by the end of November.

“We have a new chemistry teacher who’s very excited that he’ll be the first teacher to use the new chemistry lab,” the principal added.

To house the students during construction, the school district brought in 24 portable classrooms. The temporary classrooms line the back drive of the La Puente school.

The modernization project is being funded by a $118 million construction bond passed in 2006. 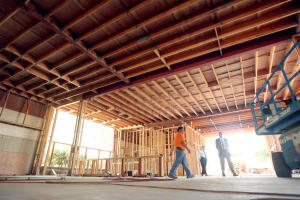